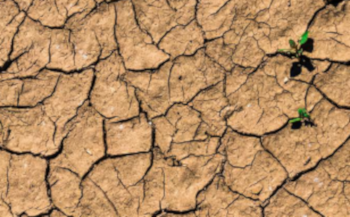 Scientists say the Mediterranean region, Southern Africa, Southwestern North America, and Central America can all expect more droughts, one of the most complex and severe disasters, which is the biggest cause of agricultural loss.

“The key challenge is to be more proactive, build resilience, and adapt to the risk of drought,” says Mami Mizutori, Special Representative of the Secretary-General (SRSG) for Disaster Risk Reduction. “This includes an up-to-date analysis of any evolving drought hazards and their related potential impacts.”

Drought can have wide-ranging and cascading impacts that can linger for a long time after it has finished. The Syria conflict is a clear example of how drought can accelerate instability.

Adaptation measures include better access to finance for farming households, different land use and modification of cropping patterns, and diversification of income sources. Drought insurance is also effective, but is hard to achieve in countries where the formal insurance sector is under-developed.

Emerging from the 2015 Paris Climate Agreement, national adaptation plans (NAPs) offer a good opportunity to address all climate-related hazards, including droughts. NAPs have the potential to accelerate the common goal of climate and disaster resilient development.

There is no universally accepted definition of drought and no single way to explain, anticipate, or measure it. To help improve the understanding and awareness of the impacts of this complex phenomenon, UNISDR expects to produce a Special Report on Drought in 2020.


The sever 2006 drought in California caused losses of up to USD 4.4 billion. However, these primarily reflect agricultural damage. The real cost may be higher.

The 2010-2011 drought in the Horn of Africa killed an estimated 250,000 people and left another 13 million dependent on humanitarian aid

In the Dry Corridor of Central America, a region at high risk of recurrent drought and excessive rainfall, FAO has been supporting government partners to implement livelihood resilience programmes, including tailored agro-climatic early warning information systems.

Since 2015, the South African province of Western Cape has experienced a series of low and below-average rainfalls. In early 2018, these deficits slowly became the region’s worst recorded drought in a century. A true emergency, it affected more than four million people.
Download the entire press release here.