Fires and wildfires: fears grow over mounting losses from wildfires 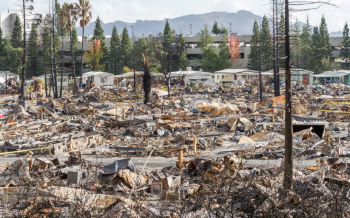 Wildfires already affect millions of people, destroying livelihoods and killing more than 300,000 people a year but - with climate change - fires will pose an even greater threat to life, including wildlife, and property, states this year’s Global Assessment Report (GAR19) on Disaster Risk Reduction.

Climate change brings longer droughts and higher temperatures, which in turn means that wildfires will become more frequent and widespread with longer seasons. In dry climate zones, fire incidents can quickly transform into mega fires as evidenced with the wildfires that occurred in California in 2017, and Greece and Portugal in 2018. According to Swiss insurer, Swiss Re, wildfires destroyed USD 14 billion worth of insured property in 2017, the highest ever amount in any single year.

“Climate change dials up the volume on the risk of wildfires,” says Mami Mizutori, Special Representative of the Secretary-General (SRSG) for Disaster Risk Reduction. “It is both a major driver and amplifier of disaster losses. If we do not include climate change scenarios in risk reduction planning, then we are building in an inherent redundancy in all we do.”

Burning forests, plastics, and hazardous chemicals, releases toxins into waterways, soils, and more. Smoke from fires includes a chemical mixture of substances, such as carbon monoxide and carbon dioxide, or ammonia, dioxins and other highly toxic compounds that can be highly harmful to health.

The Global Wildfire Information System (GWIS) records 350 to 400 million hectares of land burnt every year. It does not monitor small fires, however, with hectares burnt likely to be even higher.