Chapter 1: How we got to now

1.1 Evolution of the global policy agenda for disaster risk reduction

Having observed that actual and potential consequences of natural hazards were becoming so severe, and were of such a scale, that much greater emphasis on pre-disaster planning and prevention was imperative, the United Nations Disaster Relief Coordinator convened an International Expert Group Meeting in July 1979 to review six years - worth of work developing a methodology for risk and vulnerability analysis. 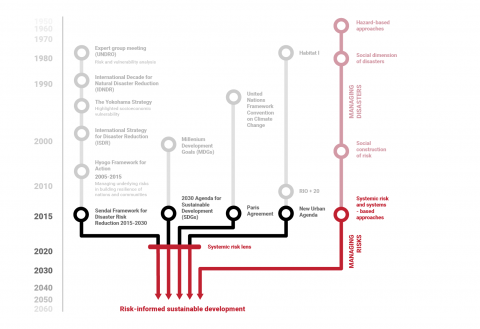 Supported by a Secretariat established at the United Nations Office in Geneva, IDNDR was intended to reduce - through concerted international action - loss of life, damage to property, and social and economic disruption caused by "natural disasters", especially in developing countries. With a strong emphasis on engaging and deploying existing scientific and technical knowledge, IDNDR succeeded in raising public awareness -notably of governments- to move away from fatalism and to reduce disaster losses and impacts. A pivotal moment in IDNDR was the adoption (in 1994) of the Yokohama Strategy for a Safer World: Guidelines for Natural Disaster Prevention, Preparedness and Mitigation, containing the Principles, the Strategy and the Plan of Action (Yokohama Strategy) at the World Conference on Natural Disaster Reduction.

The Yokohama Strategy marked the beginning of a significant shift in the political and analytical context within which disaster reduction was being considered. While IDNDR was largely influenced by scientific and technical approaches, the Yokohama Strategy attributed great importance to socioeconomic vulnerability in disaster risk analysis, emphasizing the crucial role of human actions in reducing the vulnerability of societies to natural hazards and disasters.

Having been so mobilized, at the conclusion of IDNDR, Member States determined in 1999 that IDNDR would be succeeded by the International Strategy for Disaster Reduction (ISDR). This would seek to: (a) enable communities to become resilient to the effects of natural hazards, and related technological and environmental disasters, thus reducing the compound risk posed to social and economic vulnerabilities within modern societies, and (b) proceed from protection against hazards to the management of risk, by integrating risk prevention strategies into sustainable development activities.

At the end of the period covered by the Yokohama Strategy, in 2004 and 2005, the United Nations Secretariat of the International Strategy for Disaster Reduction carried out a review of the Yokohama Strategy and Plan of Action for a Safer World. The Yokohama Review found evidence of greater official and public understanding of the effects of disasters on the economic, social and political fabric of societies, and stated that - significantly greater commitment in practice is required-. It also identified challenges and gaps in five main areas: governance; risk identification, assessment, monitoring and early warning; knowledge management and education; reducing underlying risk factors; and preparedness for effective response and recovery.

The Yokohama Review was submitted to the second WCDR in Kobe, Japan, in January 2005. It formed the basis for formulation of the Hyogo Framework for Action 2005 - 2015: Building the Resilience of Nations and Communities to Disasters (HFA). The adoption and implementation of HFA following WCDR marked a milestone in catalysing national and local efforts to reduce disaster risk and in strengthening international cooperation through the development of regional strategies, plans and policies, and the creation of global and regional platforms for disaster risk reduction (DRR), as well as the adoption by the United Nations of the United Nations Plan of Action on Disaster Risk Reduction for Resilience.

Member States adopted a series of principles to support implementation of HFA including: the primary responsibility of States to prevent and reduce disaster risk together with empowered relevant national and local authorities, sectors and stakeholders; all-of-society, inclusive, engagement; coordination within and across sectors and with relevant stakeholders at all scales; a multi-hazard approach and inclusive, evidence-based risk-informed decision-making; addressing underlying risk factors through public and private investments informed by disaster risk; strengthening international cooperation; and emphasis on developing countries.

1.2 Sendai Framework and the pursuit of risk-informed sustainable development

Soon after the Sendai Framework had been negotiated at the third WCDR, Nepal was struck by the powerful Gorkha earthquake on 25 April 2015. Ravaged by the initial event, numerous aftershocks and another quake 17 days later, 8,891 people lost their lives, 22,303 were seriously injured and millions were made homeless. Nepal had to absorb damage and losses of an estimated $7 billion, a bill it could ill afford. It was a jarring reminder of the devastation wrought when the context of hazard, exposure and vulnerability is allowed to evolve without adequate attention to the corollary risk it is building. It demonstrated anew how apparently disparate decisions across sectors, geographies and scales - endogenous to development processes - are intrinsically braided together.

Enhancing understanding and management of the threads of this collective, social construction of risk, as well as the impacts that impinge upon individuals, households, communities, cities, countries, economies or ecologies through time, is at the heart of the aspirations and goals of the Sendai Framework, adopted by Member States at the United Nations General Assembly in June 2015. The principles reflect the collective responsibility of people, governments, communities, the private sector, investors, media and civil society to effectively prevent and reduce disaster risks. They embody increased demands for accountability mechanisms to protect populations and ecosystems, while instituting risk-informed approaches to better manage current and emerging risks.

As with the Transforming our World: the 2030 Agenda for Sustainable Development (2030 Agenda), the outcome and goal of the Sendai Framework is underpinned by the principle of universality, recognizing that no society - regardless of income classification - is immune to the negative consequences of realized risk.

Traditional event-based estimates of (predominantly direct) impact attribute most economic losses to high-income nations - a function of the higher monetary value of insured damaged assets - while the human cost of disasters is substantially higher in low- and lower middle-income countries. Such analyses correctly identify the most vulnerable segments of the world's population as consistently suffering the most harmful effects - in many instances, reversing development gains, corroding resilience, undermining sustainability, eroding well-being and diminishing socioeconomic growth.

Recognizing the threat that risk poses to sustainable development - be it as a result of economic loss or the disruption to social and ecological systems - the Secretary-General of the United Nations noted (on the International Day for Disaster Reduction, 13 October 2017):

The challenge is to move from managing disasters themselves to managing risk. Poverty, rapid urbanization, weak governance, the decline of ecosystems and climate change are driving disaster risk around the world. The Sendai Framework for Disaster Risk Reduction with its seven targets for the prevention of disasters and reducing disaster losses is essential to achieving the Sustainable Development Goals.

Unresolved vulnerabilities, rising exposure and proliferating, mutable hazard events continue to drive catastrophic loss of life, disrupt livelihoods and fuel new displacement - an additional 17.2 million people were internally displaced in 2018 alone as a result of climate-related disasters and natural hazards. It is estimated that people in least developed countries are, on average, six times more likely to be injured, lose their home, be displaced or evacuated, or require emergency assistance, than those in high-income countries.

The impact is greatest on the most marginalized populations, exacerbating inequality and further entrenching poverty, where vulnerabilities translate into reduced access to entitlements, impaired capabilities and opportunities. For instance, it is estimated that 35.6% of the population affected by floods in Pakistan in 2010 consequently slipped under the poverty line as a result. Beyond focused attribution to single events, when extending the spatio-temporal nature of consequence analysis, impacts are often found to be a function of a series of associated shocks - famine, disease and displacement for instance - that collectively prompt disruptions in multiple dimensions (e.g. livelihoods, educational trajectories or labour-market opportunities).

Such analyses remain a grossly under investigated domain. The longitudinal, indirect consequences of the realization of accumulated risks are likely to affect and potentially reverse development gains in affected areas for generations to come. These consequences may be in the form of deprivations in early childhood nutrition, disease, school interruption, ill-developed cognitive and social skills, or limited labour-market opportunities. Children are particularly affected by the disruption of education and health-care systems; women and girls suffer higher levels of violence and generally worse economic outcomes following disasters; , and the extent to which mental health, well-being and the ability to lead a dignified life are negatively affected is little understood.

Such are the current limitations in understanding of risk and the interdependencies and correlations that exist within and among social, ecological, economic and political systems, which, in turn, diminish the ability to predict or influence outcomes. However, the principles of integration and indivisibility that underpin the Sustainable Development Goals (SDGs), and the related call in the Sendai Framework for the adoption of systems-based approaches and an improved understanding of the dynamic nature of systemic risk, are driving new lines of enquiry, model methodologies, and opportunities for data cultivation and exchange among communities.

You are viewing an excerpt of this chapter. To access the entire chapter or the full GAR report. Download the entire introduction.
chapter_1.pdf372.21 KB
full_report.pdf23.54 MB